The extrusion method uses cold heading machines having one die and two blows, up to, 6 dies one blow. The extrusion method uses wire as the raw material and offers a very low scrap waste factor. The only material waste is a slug equal to the diameter of the hole in the rivet body having a thickness of as low as .030 (.076mm). The production speed of extrusion is less than stamping, but the tooling or mold costs are less for extrusion. The benefit of extrusion is low scrap and low tooling costs.

The stamping method uses high speed stamping presses and strip sheet raw material. There is a very high scrap factor with the stamping method, but the production rate is higher than the extrusion method. A stamping tooling die having 5 rows of tooling mounted in a press that can stroke 300 times per minute will produce 90,000 rivet bodies per hour. I have seen presses that can stroke 600 cycles per minute producing 180,000 rivet bodies per minute. Tooling costs is very high but the production rate is very high.

I have been asked many times “How can I know by looking at a blind rivet if the rivet body is extruded or stamped”? There are some visible features between extruded and stamped rivet bodies. 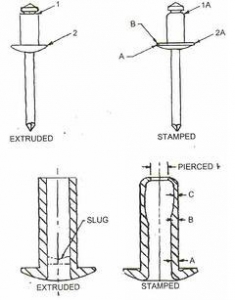 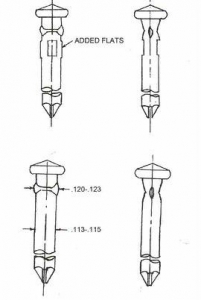 Some blind rivet manufacturers are still using stamped stainless steel rivet bodies. I believe this is so because of the tooling breakage when extruding and heading stainless steel.

When blind rivet manufacturing first started stamping rivet bodies were used. Then extruded rivet bodies started to be produced and in my opinion, giving the user a better blind rivet.